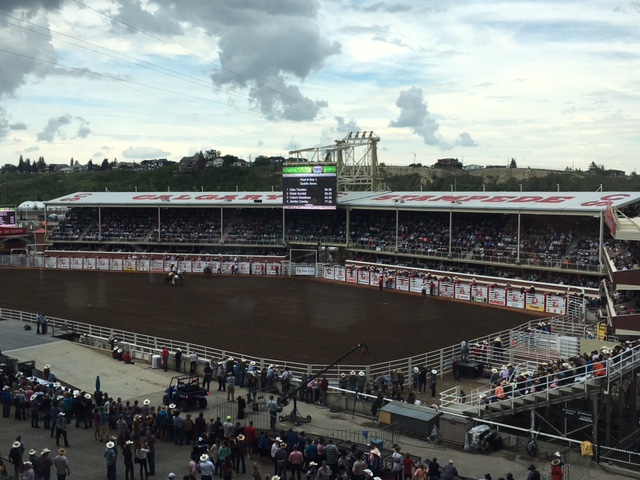 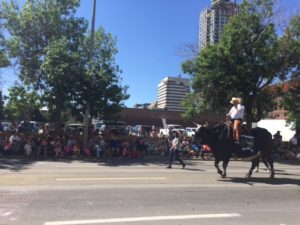 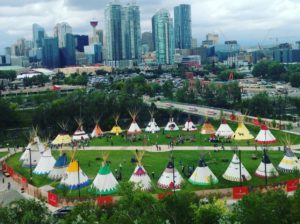 Sunday marked the final day of the 104th Calgary Stampede. Like the rest of last week, Sunday was chilly and full of rain.

The 10 day Calgary Stampede kicks off each year with a massive parade. Last year I had family visiting from out East so parade attendance was almost mandatory. I had booked reserved seats on the route through a local charity. In prior years, we’d gone downtown at 5:00 AM to save seats for the 9:00 AM start. This year, there were folks who camped the night before on the route just to get their prime spots! The Stampede parade is grand in so many ways! There is the music of over 30 marching bands, the clopping of the hooves of over 750 horses on the pavement, the colours of the 150 different entries. You are completely enveloped when you sit there on the side of the road. Being there in person will always top watching it on the television. The sights and sounds of the parade are just a sample of the Calgary Stampede.

With the start of the stampede, comes the start of all the pancake breakfasts. There are over 100 breakfasts held during the Stampede’s 10 days. There are so many in fact; that there are websites and even apps dedicated to tracking them all. Many breakfasts are free or by donation to a local charity. The standard breakfast includes pancakes, eggs, sausages, baked beans and a whole lot of Canadian maple syrup. Not all breakfasts are standard though, some showcase the vast diversity of Calgary. For example, this year, Fiesta Filipino, in conjunction with (our tenant) Pacific Hut Restaurant held the “Agahan First Stampede All Filipino Breakfast” Attendees enjoyed free traditional Pinoy breakfast including longanisa, a sweet, Spanish-inspired sausage. The breakfast had a large turnout with many hoping it becomes an annual event. There is also the annual Ismaili Muslim Stampede Breakfast which celebrated its 20th year this Stampede. The last couple of years, the event had fallen during Ramadan and was actually being held as a “sunset breakfast”. This year however, Ramadan ended prior to the event so it was moved back to morning hours. The breakfast included the standard pancakes and eggs served alongside a traditional east African dish called barazi which consists of pigeon peas in a spicy coconut sauce.

With the sheer number of events taking place across the city, one could easily go 10 days without having to make or pay for breakfast even once.

Once you’ve had your fill of free pancakes, you must head on down to the Stampede grounds. The list of things to do and see is endless. There are the carnival rides, the Indian Village, the Grandstand Show, and the Rodeo just to name a few. Our Calgary office was fortunate enough to attend the Calgary Stampede Rodeo this year along with BFL Insurance. The rodeo was incredible with competitors coming from nearby towns to as far away as Sao Paulo, Brazil. You can’t help but cheer when the difference between winning and losing for these competitors is a tenth of a second. The Calgary Stampede rodeo has been dubbed the “Greatest Outdoor Show on Earth” and truly lives up to the name.

The list of things to eat on the grounds might even be longer than the list of things to do. There are booths dedicated to all sorts of BBQ like beef on a bun or giant turkey legs. There are also booths serving up regular carnival fare which encompasses pretty much anything that can be eaten off a stick or at least with one hand. Lastly, are the food vendors looking to make their mark by serving the some of the most unique fare, last year the big new item was scorpion pizza. The delicacy actually sold out; whether it was because people enjoyed it or were dared to eat it, is still up for debate. This year, for those who dared (or were dared), there were “sticky toffee bug balls”. The sweet treat consisted of mini donuts topped with meal worms and crickets amongst other things. No word yet on if this one sold out as well. The more approachable (and popular) item this year was the “big pickle dog”. The crowd favourite consisted of a hot dog stuffed inside a pickle then corn dog battered and served on a stick. Judging by the lines at these booths, I imagine many people are hoping to see it again next year. Food at the Stampede grounds could almost be called an event in itself!

Stampede week this year was wet and cold with occasional bouts of sunshine. While attendance likely won’t be anywhere near the record of 1,409,371 set in 2012, the rain certainly didn’t stop people from heading down to the grounds.

The Calgary Stampede draws so many people to our city. For 10 days, Calgarians truly get to showcase our “white hat” spirit also known as our natural ability to act as ambassadors and tour guides for the City. The Stampede spirit permeates Calgary and can be felt whether you make it down to the grounds or not.

As a born and bred Calgarian, I wouldn’t be doing my civic duty if I didn’t end this post with a bit of Stampede advice. Just remember one thing and you’ll be good, whether you end up going to the Stampede once in your lifetime or every year for 50 years, its yahoo, not yeehaw!